As you may already have picked up from this blog, I am – in the words of Will McAvoy – on a ’mission to civilize’ . Not in his slightly condescending way, but in an educating way. And progress may be slow, ’but I’m in it for the long haul’. Because you see, many people have high hopes for what we call international law, or more poetically, the law of nations. Yet, international law is often overestimated by its proponents, and widely misunderstood and underestimated by its critics. And like any legal professional, mistakes about international law in news reporting, tv-shows, movies or any other medium, drive me nuts. So let me help correct that in 1000 words or less.

In the coming months I am going to attempt nothing less than to educate you about international law. It is my hope that international law may better understood, and after which you can judge for yourself what its effects are in the world. At the very least, you will know what you are talking about. And you may join me in exasperation, or if applicable, correct the error of your ways. In any case you will be enlightened. This series is about how international law works, not how it should work or what it should cover. It attempts to be succinct and without any pomp and circumstance, and can therefore used as a reference guide or just a good starting point. Each post is therefore limited to 1000 words. That way I will be forced to keep it simple, while catering to the attention span of most people these days. I may decide to go beyond the mere mechanics of international law and also delve into areas such as environmental law, the law of the sea, or even space law. But we’ll see when I get to the end of the planned series of posts.

But before I make my attempt, a disclaimer is in order. Law is not an exact science. It is therefore wrought with opinions, not truths. Sure, much scholarly work has been devoted to all aspects of international law and those opinions are supported by substantial and exhaustive research, but they remain opinions. Ultimately, every international law observer has some fundamental beliefs about how international law works or the state that it is in, and from which emanate all other opinions. I am no exception.

My biases about international law

So here are some of my beliefs – or biases – as they will shine through in the coming months:

The first post will cover the most basic building block of international law, sovereignty, or discretely called ’The S-word’, and in which the first mentioned belief or bias is on full display.

So make sure to stay tuned! Do you have any specific international law topics or phenomena that you are curious about? Let me know in the comments below, or through Instagram, Twitter or Facebook. 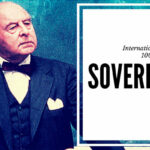