The Meaning of Sovereignty

Sovereignty is the product of a gradual process of war, imperial conquest and religious rivalry that culminated in Westphalian peace treaties of 1648. That year is conveniently, yet erroneously used as the birth year of sovereignty and modern international law, also known as the Westphalian system. Its meaning can be best described in terms of its manifestations – internal- and external sovereignty. First, the state is the highest and exclusive governing authority on a given territory and over the population present (internal). No other state has authority in that space. Second, states are not subject to any higher authority in their international relations (external). In this sense, sovereignty signifies independence from other states.

Several legal principles that are fundamental to the international legal order flow from this understanding of sovereignty:

Sure, these fundamental principles can seem partly illusory in the context of geopolitics and Great Power squabbling. Yet, consent and equality remain at the very least a legal fiction that justifies the existence of such a source of law. States are still restrained in their actions the non-intervention principle, as it frames and limits their legal room to maneuver. So the much maligned Lotus position still holds, in my view: International law is a self-imposed constraint by states upon their freedom to act as they please. Those constraints were traditionally applied to relations between states to ensure peaceful coexistence. With ever increasing globalization, states have developed international rules for issues that transcend borders and the capacity, or interest, of a single state. These include international crime and environmental degradation, but also coordination in aviation. Human rights law has been challenging the internal sovereignty of states since 1945. International organizations, which have been in existence since the 19th century, have also taken a central position in developing international law. Yet, none of it is proof that the concept or the position of sovereignty has been fundamentally changed.

Sovereignty as a problem

Nevertheless, it is unpopular to use the S-word as the central paradigm of the international order. Sovereignty is rather seen as an obstacle to solving  global problems and humanitarian concerns. It has been re-interpreted in the concept of the Responsibility to Protect (R2P) as also meaning ’responsibility’ of the state towards its own citizens, society and even the international community. If a state fails to live put to that responsibility, there is a moral duty for the international community to intervene. Yet, the failure translate R2P into legal principles is testimony to the enduring power of the Lotus position. Implementation would require the consent of states to undermine the basis for their own existence and legal authority. Elevating R2P to a legal principle is also dangerous, because the concept is open to abuse by the powerful states in the world. Paradoxically, when it comes to transboundary issues that no state alone can resolve, sovereignty actually becomes a counter-argument.

The myth of ’pooled sovereignty’

Some commentators speak of ’pooled sovereignty in the context of the European Union. Member states are supposed to have given up part of their sovereignty in exchange for the benefits of subjecting themselves to a legal order that can impose certain obligations on them. However, sovereignty, like pregnancy, is a binary proposition. You are or you aren’t. There is a distinction to be made, namely between giving up sovereignty on the one hand, and sovereign powers on the other. Sovereignty is indivisible, and states can theoretically revoke their consent. Sure, practice shows a different picture, but that is for another time. States can transfer the exercise of sovereign powers to such entities like the European Union without losing its independence.
In short, sovereignty is the main organizing principle of the international order, but its exact content and role is changing. The nature of modern international law is now uncertain, and the debate, therefore, continues.
What does sovereignty mean to you? Let me know in the comments below or through Facebook, Twitter, LinkedIn or Instagram.
Comments
pingbacks / trackbacks 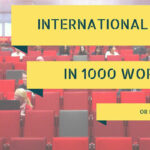 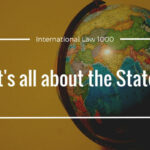