[Warning: long and cliché complaint about the abominable status of political discourse everywhere. You will have heard or read it all before. Ignore at your own convenience. Or not.]

Are we witnessing the death of democratic politics? The sh#$-storm that is called the 2016 US Presidential Election is the latest, perhaps the climactic data point in a worrisome development. What I am about to excrete may be considered the desperate outcry of a hopeless political romantic. It is a kind of undirected anger at democratic discourse around the world. Today, we see an increasing lack of civility in political discourse. Fact-free political discourse has been around longer. And I can’t even remember a time when being a career politician was seen as something positive. Too bad in a democracy we can’t do without civility, facts or professional politicians if we ever want to implement effective solutions to the problems that we face.

A thing that makes my blood boil: disinterest in politics. People either claim that politics does not concern them, or that politicians don’t listen to them anyway. Nevertheless, in my naïveté I still don’t understand why people don’t want to show up to vote. Because everything is political. From the price of bread and milk at the supermarket, to the quality of roads, education and the fate of one’s country in general. Whether you like it or not, every aspect of your life is governed one way or the other. Even the extent to which it is not. The old saying holds true that ’decisions are made by those who show up.’ So I tend to think that if you don’t show up, shut up. I recognize that people are disappointed with both politics and the press – the establishment – for a variety of good reasons. This has created a level of mistrust that is probably unprecedented. But not showing up to vote, to debate, or even think about the issues disqualifies you from bitching about the unresponsiveness of politics to your problems.

Facts and the press in democratic politics

A prerequisite for effective and sustainable democratic politics is an informed citizenry, but we increasingly live in a fact-free arena. Which is ironic because of the literally unlimited sources of information available online. Back in the day, it was the press and the freedom of the press that provided the facts and information the only way these can presented: neutral and independent. Otherwise they are not facts. Facts are the oxygen that is necessary to sustain democratic life. The press is the bloodstream through which facts are distributed. Now, we are confused as to what is fact and fiction and have no more patience for being critical ourselves. We tap into whatever source pleases us. We are uninformed. Take a fake-news anchor’s word for it.

Facts are also like the law. They necessarily demarcate the field upon which we play the political game and govern how we play it. But if no one calls anything out of bounds or throws a yellow flag (pardon the football metaphor), then all bets are off. We no longer have a game, but a free-for-all that gets nastier by the minute. The quality of government and democracy itself become mortally wounded. Public debate without facts or press is liking playing football without rules or referees. Without a fact based discourse, there cannot be a debate about any solutions to whatever problem that needs debating. If facts are political, these ’facts’ get weaponized with the result that the political systems ceases to be effective, i.e. bring about improvements in society. And whatever the press is peddling, no one trusts.

Politics is a noble profession

If everything is political, the duly elected politician is quite an important figure. Yet, we despise the professional politician who hangs on too long to his office, or who goes from one to the other. The professional politician is seen as divorced from everyday concerns, everyday people and their everyday interests. We see him as being bought by special interests, or just looking out for his own. Why is it that we doubt that politicians would expose themselves to such public criticism ’just’ for doing public service? For doing something that interests them? Are they politicians just because they think that it is a good gig? Or because they are corrupt on par with some banana republic and fake-democracies? Politics used to be a noble profession, a legitimate career; an arena in which politicians disagreed but respected each other. Somehow we need to get back to that. And in some countries, money needs to get out of politics.

Civility as a necessity

Even in the Netherlands, there are hints of something that you could call the Americanization of politics. Politics and politicians are increasingly perceived as ineffective, self-centered and disconnected from reality. In order to relate to the populace that is angry for a number of reasons, including the unresponsiveness of the political system, and the ensuing language is troublesome. While political discourse is still generally civil, it is only a matter of time before the angry cries of the disenchanted populace are echoed in the halls of parliament. But if we are going to solve the problems of that very populace, politicians not only need to talk and listen to people. They need to talk with each other, and they need to do so in a civil manner. Because any substantive talks will not last very long. To question the patriotism or sincerity of a head of state or government, a fellow lawmaker or a member of the judiciary, undermines any effective political decision-making.

How did we get here? Well, facts are irrelevant when it comes to identity. As I wrote before, we are in a perfect storm with the issue of identity at its center. Ethnicity, race, culture, religion, capitalism, political belief-system and so on and so on. Think Trump’s angry, white, lower educated, often unemployment man; think Black Lives Matter and the Dutch anti-Black Pete movement. We increasingly feel that our identity is under threat from a globalized world, diversified societies and economic adversity. Feelings cannot be but genuine, but are awfully difficult to combat with facts. So the politician who wants to represent those groups just needs to echo and mimic those feelings. And they can play fast and loose with facts, because they are irrelevant to their argument anyway. In this situation, the parochial interests of the minority group start to supersede those of the larger community. Minority groups are pitted against each other and the unraveling of the community begins if politicians stand idly by. We may no be there yet, but we are on our way.

I would think that we could all agree on the idea that serious problems needs honest debate in search of reasonable solutions. A representative democracy needs such a debate in which elected officials propose, debate and make the case for their solutions. It is called leadership. And if the electorate does not agree, they can vote on Election Day. Am I dreaming about an idealistic body politic that also encompasses fidelity to facts and dedication to public service as articulated by Aaron Sorkin and Frank Capra in The West Wing, The Newsroom and Mr. Smith goes to Washington? You damned right I do. But I also live in the real world. Any idealism that I may have must be practical, pragmatic. The idealism that I have is that I recognize that people are inherently good, prone to irrational acts, and definitely capable of evil. And there are no simple answers to complex questions. It is a rational idealism that makes me climb the wall whenever I check the news.

From a ideological point of view, you may not be surprised that I subscribe to JFK’s political credo:

I would humbly add that human decency is the basis for our civil discourse.

“It is, I believe, the faith in our fellow citizens as individuals and as people that lies at the heart of the liberal faith. For liberalism is not so much a party creed or set of fixed platform promises as it is an attitude of mind and heart, a faith in man’s ability through the experiences of his reason and judgment to increase for himself and his fellow men the amount of justice and freedom and brotherhood which all human life deserves.”

The Death of Democratic Politics

One purpose of this blog is in a sense a journalistic one: provide knowledge, context and analysis so that people can make informed decisions, at least in the field of international law. Let that be my little contribution to democracy. But we need more. Fidelity to facts as checked by a vital and independent press; civility in debate; a commitment to the political and democratic process; and honest and courageous leadership. Those are essential ingredients for an effective democratic polity. And we are on our way of squandering not one, but all of them at the same time. It will be the death of democratic politics. Millennials seem to think so.

To end on an optimistic note: it is not too late. What do you think needs to happen? Let me know in the comments below, or through Facebook or Twitter. 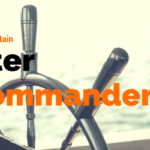 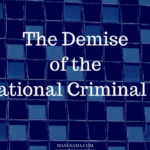 The Demise of the International Criminal Court?Current Events, Law