I like to watch American Football. The New York Jets in particular, which is a painful experience every time. And throughout my viewing career I have had to explain myself to my friends. And family. They have called it a dumb and violent game, but also point to rugby as a truly ’manly’ game (no helmets and pads). Not having grown up with football, I am still learning about the game myself every time I watch. But I have always claimed that it is in fact a tremendously complex and smart game that requires some pretty smart players (for a most basic introduction to the game, click here). I have never dared to really discuss this with my international law colleagues for fear of being ridiculed. So I thought I would convince them the lawyer’s way. Because many American Football rules closely resemble the international laws of war. Yes, they do. Bear with me.

American Football is indeed a violent game and it is often advertised and promoted as a war-like game more so than other sports. Go on YouTube and you will see some incredible collisions between players. And it is so culturally engrained in American society that it is said that the tv-ratings for the sport clearly correlate with the mood of the nation and whether it is at war. But I would argue that even more so than the actual violence, it is the strategies and the tactics employed that makes football warlike. The general staff on the sidelines sets out the strategy before the game, depending on the strength and weaknesses of the opposing team. A tactic to literally gain ground is relayed to the players, the soldiers on the field before every movement or play with the ball, which is then executed.

American Football is like conducting 19th century warfare governed by 20th century laws of war. During much of the 1800s, armed conflict was conducted from static and visible positions on broad fields on which the opposing sides just slugged it out. There were rules to warfare even then, but only in the 20th century were laws of war extensively laid down and developed. And since the 1949 Geneva Conventions were adopted the laws of war are an integral part of warfare. As are lawyers. The conduct of war is governed by four principles: humanity, military necessity, distinction and proportionality. The latter two are derived from the first two. In short, the laws of war prohibits anything that is unnecessary to defeat the enemy, and protects those who are not engaged in combat (anymore).

In football as in war, the rules aim to minimize the amount of violence. To some it sounds convoluted or unrealistic, but the rules in both arenas delegitimize unnecessary violence and try to make the fight a ’fair’, and thereby an ’honorable’ fight in an eighteenth or nineteenth century way.

So here than are the five rules in American Football that resemble some rules and prohibitions in the laws of war:

The rule development in football has gone so far that it takes quite an operation to keep track of rule transgressions. But umpire decisions on fouls cannot be reviewed and overturned as other decisions can. In general, the rules and rule enforcement are akin to a complete legal system in its scope and depth. Plays are reviewed, analyzed and litigated like lawyers analyze facts and rules in court. Interpretation is a thing, also in football. Any set of rules of any game can be seen as a self-contained legal system, but football is in a league of its own when it comes to its lawyerly quality.

For you football fans out there: what did I get wrong here? And/or for all you lawyers: have you ever looked at sports like this? Let me know in the comments below, or through Facebook or Twitter. 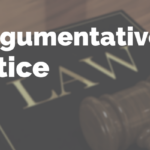 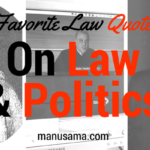 Favorite Law Quote: On Law and PoliticsLaw and Popular Culture