I don’t mean to become repetitive here, but when it comes to jurisdiction, we can also start with the Lotus-case. But first, what is jurisdiction? As an expression of internal sovereignty, jurisdiction is the legal power that is exercised by the state ’over persons, property and events.’ At least when it comes a state’s own territory, it exercises jurisdiction to the exclusion of any other state. That jurisdiction extends not just over territory, i.e. ’land’, but also over the airspace above and parts of the sea. But the extent of a state’s jurisdiction in those adjacent areas is not our concern right now.

While states have exclusive jurisdiction on their own territory, persons, property and events outside of their borders eludes them. But the reality of international life that goes back centuries, is that events outside of a state can have profound impact inside its borders. As an equally logical consequence, states struggle to affect these events. They want to assert so-called extraterritorial jurisdiction, exercise power outside of their own territories, but are blocked by the territorial nature of sovereignty and jurisdiction. As the Lotus-judgement noted, a State ’may not exercise its power in any form in the territory of another State.’ A logical consequence of sovereignty. But how can states nevertheless assert some authority over persons, property and events in this globalized world?

Before we get to that however, we need to distinguish between different types of jurisdiction. First, we have the jurisdiction to prescribe, that is the power to legislate laws and regulations. Second, there is the jurisdiction to enforce those laws and regulations, through law-enforcement mechanisms, such as the police. Third, a state has the power to adjudicate cases through its courts, which can be considered a form of enforcement. And the question becomes more specific: to what extent can a state act extraterritorially under each of these powers?

When it comes to enforcement jurisdiction, the picture is clear. A police officer is not allowed to cross the border into another country to chase and arrest a suspect, unless he has permission. Enforcement jurisdiction is strictly territorial, as the Lotus judgement noted as being the first restriction on the sovereignty of states. But what about the other types? Legislation takes place within a state, so when we follow Lotus further, a state can legislate for what- and whomever it wants. At least in theory, the Netherlands can criminalize shoplifting by Belgians in London’s Harrods from the perfume department. Equally, what is to prevent a state to give jurisdiction to its courts to adjudicate such cases? Besides international friction that is.

It becomes a matter of principles and due regard for the interests of other states, and not so much of hard and fast rules. Moreover this ’system’, if we can call it that at all, also implies that more than one state can have a legitimate claim to jurisdiction over an event. And there is now an expectation that each state backs up the legitimacy of its claim by referring to one or more principles of jurisdiction that are accepted in international society. But there is nothing that suggests that these go beyond mere principles, and perhaps more importantly, there is no rule or principle that decides which claim is the better. States can have what is called concurrent jurisdiction.

So what are these principles that can legitimize a claim to jurisdiction? Of course, first, the subjective and objective territorial principles legitimize a state’s jurisdiction when, respectively, the event has taken place on its own territory, or has a certain effect on its territory. Secondly, jurisdiction is considered legitimate when either the perpetrator or the victim of a certain act has the nationality of the state claiming jurisdiction. These is called the active or passive nationality principle, respectively. The latter is still somewhat controversial, because it  A third principle is the protective principle, legitimizing jurisdictional claims when a vital interest or security of the state is threatened. What that exactly means is up to the threatened state to decide. So, as you may have surmised, most of these principles do provide grounds for claiming extraterritorial jurisdiction. But there is a fourth principle, but that merits separate mention.

A special case: the universality principle

The universality principle provides a justification for states to exercise jurisdiction over whomever and wherever. Originally, universal jurisdiction was reserved for pirates at sea, which solved the problem of the lack of jurisdiction on the high seas. But now the principle is invoked to ensure that the perpetrators of the gravest of crimes should not find a save haven anywhere in the world when many of these crimes are committed with direct of indirect involvement of the state itself. So application of the principle has been confined to the most serious of crimes, called ’international crimes’: First, ’war crimes’ as defined largely by the 1949 Geneva Conventions and Additional Protocols; second, crimes against humanity, a concept that was a bit nebulous for a long time, but which is now defined mostly by the Statute of the International Criminal Court; and third, genocide as defined by the 1948 Genocide Convention and refined by the case law of the international criminal tribunals in existence today.

The problem  of universal jurisdiction

The application of universal jurisdiction has clear disadvantages however. If officials from one state can be subjected to the jurisdiction of another, that can create serious friction between them. Especially when everybody can request their state to start inquiries. U.S. officials, like former Secretary of Defense Donald Rumsfeld, have been the subject of privately initiated proceedings in Belgium and Germany, for example. None of them resulted in a serious legal result, but the Belgian proceedings especially caused serious international issues between states. The expectations for the prosecution of those serious crimes and criminals by national courts, has now been transferred to the International Criminal Court, for better or for worse. 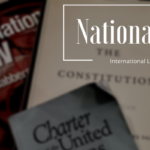